Zdeněk Lhotský: A Sarcophagus for a Queen 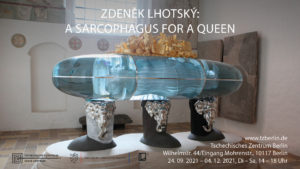 After more than 200 exhibitions in the Czech Republic and abroad, glassmaker, sculptor, painter, graphic artist, and designer Zdeněk Lhotský – an important representative of contemporary Czech art – presents his work at the Czech Centre in Berlin. The exhibition runs from 24 September to 4 December 2021.

Zdeněk Lhotský was born in Prague in 1956. He is one of the most successful students of the world-renowned icon of original glass art, professor Stanislav Libenský, and later became an important collaborator of his former teacher. Lhotský’s work has been broadly recognized abroad: For instance,  the April 2016 issue of the prestigious magazine Wallpaper included him in its list of artists who had significantly influenced the image of contemporary international design. Lhotský’s international recognition was in part a result of his post-1994 revitalization of the cast glass studio in Pelechov near Železný Brod, Czech Republic. Thanks to Lhotský and the team of top experts he gathered around him, the studio became a sought-out center for the realization of large-scale cast-glass projects by artists from around the world. But the Berlin exhibition seeks to do more, to highlight Lhotský’s exceptional creative range and multiple artistic identity.

One half of the exhibition is dedicated to his one-of-a-kind realization of a glass sarcophagus for Her Highness Queen Margrethe II of Denmark, which Lhotský and his team worked on in Pelechov from 2012 to 2018.

The second half of the exhibition shows a selection of Lhotský’s unusual glass art, geometric reliefs made of clear glass, and bowls made using the “Vitrucell” cast glass technique that he developed himself and that has become an identifying trademark of his work. Also on display are several of his most recent works, completed in 2021: large stelae made of modified Vitrucell glass.

The exhibition’s accompanying program includes a screening of Czech director Pavel Štingl’s 2019 documentary film A Sarcophagus for a Queen, which has been shown at a number of important institutions such as the Museum of Decorative Arts in Prague and was also broadcast on Czech public television, with several repeat broadcasts in response to its positive reception by experts and the general public alike. Visitors to the exhibition will have a chance to purchase two publications ­– The Plurality of Identity: The Art Works of Zdeněk Lhotský (2018) and A Sarcophagus for a Queen (2019) – both of which were made with the involvement of the exhibition’s curator, Sylva Petrová. Other events include lectures, presentations, and public forums.